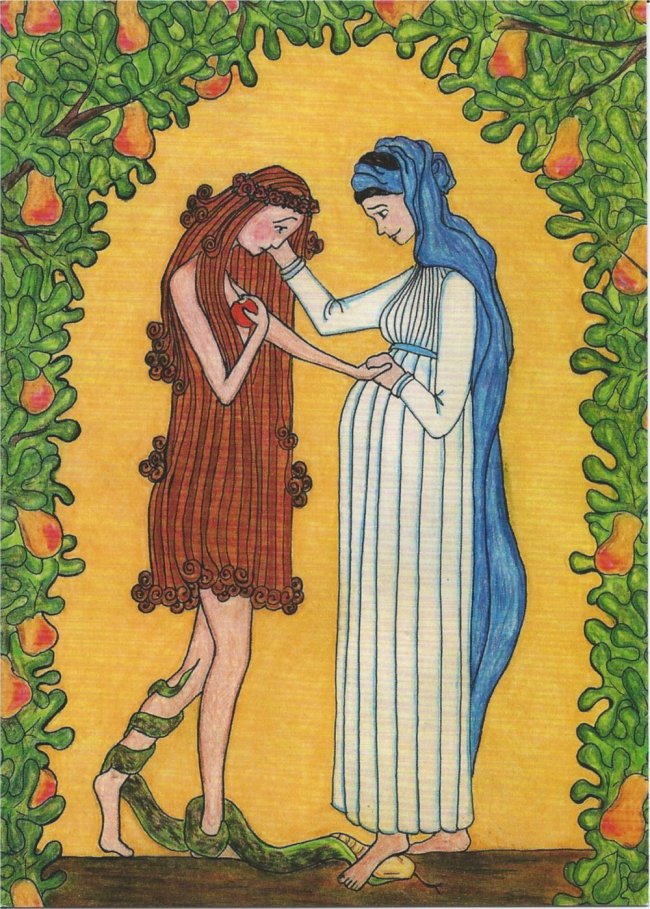 This is the fifth in a series of articles on the importance of Mary, the mother of Jesus. As we have studied what the Scriptures have to say about Mary, we have tried to show that Mary is a critically important part of God’s plan of salvation. God bestowed upon her the greatest blessing known to any woman, as Elizabeth calls her “blessed among women.” Christians throughout time are to honor her for God’s blessing and for her faith, for “blessed is she who believed,” and, “from now on all generations will call me blessed” (Luke 1.42, 45, 48). This week, we will consider Mary’s place in the broader scheme of God’s plan by looking at one way in which the Old Testament foreshadows her.

Ultimately, all biblical types point to Christ. John tells us that He “tabernacled” (“dwelt”) among us (John 1.14). The Hebrew writer likens the veil of the Most Holy Place to Christ’s flesh (Heb 10.20). When Jesus asks His apostles, “Who do the people say that I am?” Peter says that some people think Him to be Elijah; Moses and Elijah both appear at the Transfiguration, showing that their roles are being fulfilled in Christ. Thus, the tabernacle and Elijah are both types of Christ.

Though all types ultimately wind their way around to Christ, they may be fulfilled in other people and things as well. We can think of typology as a whirlpool with Christ at the center. To say that Elijah is a type of John or that Hannah is a type of Elizabeth is not to steal glory from Christ; it is to show how God connects everything together in His plan and in His church. So it is with Mary.

There are several ways in which the Old Testament foreshadows and prefigures Mary. We can see her in the matriarchs of Israel and in the ark of the covenant. We can also see her clearly prophesied in the Old Greek of Is 7.14. This week, we will focus on just one Old Testament counterpart to Mary: the first woman, Eve.

Strictly speaking, Eve is not a type of Mary but a foil who predates Mary by a very long time (though the distinction between foil and type is not crucial). A foil is someone who highlights the traits of another person, usually by having the opposite traits. The Scriptures portray Mary as the anti-Eve. They are bookends to the story of salvation, a woman at the beginning and a woman at the end. Paul similarly foils Adam against Christ, the “second Adam” (Rom 5.12-17; 1 Cor 15.45-49). Likewise, Mary is fittingly called the “second Eve” or “new Eve.”

I will allow the second-century Christian Justin Martyr to explain the antitheses between Eve and Mary: “[The Son of God] became man through a virgin, so that the disobedience caused by the serpent might be destroyed in the same way it had begun. For Eve… gave birth to disobedience and death after listening to the serpent’s words. But the virgin Mary conceived faith and joy; for… she answered [Gabriel], ‘Let it be done to me according to thy word’ (Lk. 1:38). Thus was born of her the [Child] about whom so many Scriptures speak, as we have shown. Through Him, God crushed the serpent, along with those angels and men who had become like the serpent.” Irenaeus states it even more succinctly: “The knot of Eve’s disobedience was untied by Mary’s obedience.”

It is especially appropriate that God brought His Son into the world through childbirth, the very thing which Eve’s disobedience had cursed (Gen 3.16). The work of Jesus undoes the curse of sin, and God foreshadows and underscores that fact by redeeming childbirth in the Incarnation.

Next week we will conclude by considering the final passage in Scripture that focuses on Mary. In doing so, we’ll consider another Old Testament type of Mary: Sarah. The basic parallels should be obvious: God promises sons to two women who shouldn’t be able to bear children. As we shall see, the typology runs far deeper than that. In fact, the final words of Scripture about Mary will also show us a deeper connection between Eve and Mary.